By Erik Maldre on December 18, 2007 in Uncategorized 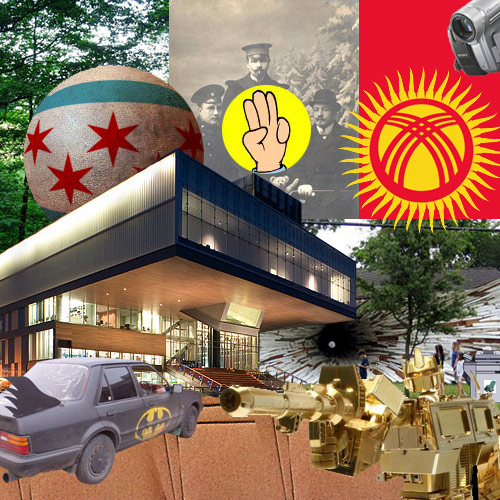 best art exhibition
Tunnel House
Artists Dan Havel and Dean Ruck completely redefined the environment of this neighborhood house. Great art gets us to think about the world in different and interesting ways. This does just that.

best crazy game
Rock Paper Scissors game variants
Posters illustrating many different ways to expand upon RPS. All you need is two people with a 5-fingered-hand that is extremely flexible.

best movie of the year
Transformers
I don’t get out much, so don’t place too much value on my pick for Movie of the Year, but this film does have one of, if not the best, scenes ever.

Now, for the big awards

best “what if”
What if you had a jungle room?

best idea
sandpaper wallpaper
Spudart had some fun with the comments section. I still would love to have a room covered with with sandpaper.

word of the year
CANNONBALL

best “Friday Faceoff”
Oh. Hold the phone. I can’t reveal everything now. The Grande 2007 Friday Faceoff Finale will be held on the last Friday of 2007 (December 28) where all participants in this year’s Friday Faceoff will compete to be champion of the year! Put December 28 on your calendar.

best product/item
Hey, hey. Hold off! There’s been many products and items featured on this blog. We’re saving that one for another day. Stay tuned!

I couldn’t agree less on Transformers. What a wreck that flick was. I never go to the movies, but I risked evertyhing to see Transformers. Boy was I ever sorry. I still am. Oh, wait, I almost spelled lame with that last sentence. Here, I’ll do it anyway. Lame. HOWEVER I couldn’t agree MORE about the photo of the teddy bear with the 3 henchmen. I even saved that picture to my computer the first time I saw it. (I even STILL to this day, troll the internet looking for my very own “Teddy and his 3 Henchmen” photo. I… Read more »