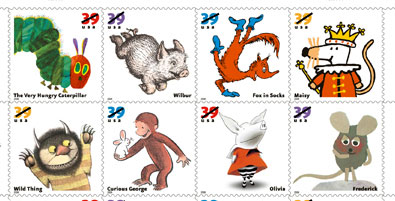 I needs to get me some of these Picture Book Animals stamps. How fun are they! My favorite stamp of the bunch is Leo Lionni’s Frederick. The simplicity of the illustration style makes for a nice stamp. Though who wouldn’t get excited to see a Curious George stamp on their mail. C’mon!

From the USPS site:

The U.S. Postal Service honors eight cherished characters from children’s literature with the Favorite Children’s Book Animals stamp pane. Children and adults alike will delight in these lively and colorful stamps, two of which “The Very Hungry Caterpillar” and “Maisy” will be issued jointly with the United Kingdom’s Royal Mail.

Maisy
The stamp art comes from Lucy Cousins’ book Maisy’s ABC , which was published in the United Kingdom in 1994 and in the U.S. in 1995. Maisy brings the letter “Q” to life by dressing herself as a queen in a crown and a royal red robe.

Olivia
Taken from the cover of Ian Falconer’s book Olivia (2000), the image on the stamp depicts Falconer’s feisty and loveable piglet heroine in her signature red dress and black-and-white striped tights.

* For design purposes, the image of Olivia on the stamp has been reversed from the original publication.

Wilbur
Illustrator Garth Williams gave form to Wilbur, the lonely pig befriended by a spider in E.B. White’s book Charlotte’s Web (1952). The image on the stamp features Williams’s original pen-and-ink drawing of Wilbur delicately enhanced for the 1999 edition of the book by the watercolors of illustrator Rosemary Wells.

Frederick
Leo Lionni’s use of torn paper collage lends vitality and animation to the living creatures he illustrates. Taken from Lionni’s book Frederick (1967), the stamp art depicts Frederick the field mouse bashfully standing on a rock after reciting a poem.

* For design purposes, the image of Frederick on the stamp has been reversed from the original publication.

Fox in Socks
Taken from the book Fox in Socks (1965) by Dr. Seuss, the image on the stamp captures the playfulness of the title character, who balances on one hand while lifting his feet “covered in blue socks of course” high above his head.

I’m unfamiliar with Frederick. I’ll have to do some research on him. He’s painfully cute here.

I like the “Wild Thing” from Maurice Sendak. I always loved that book when I was coming up.

Sorry Tom, but Maurice Sendak’s illustrations scared me as a child, and they still kinda spook me out now.

“The Very Hungry Caterpillar” was one of my first books! I remember my parents reading it to me. I was also a fan of “Where the Wild Things Are” and of course “Dr Seuss” and “Curious George.” And later on, a really big fan of “Charlotte’s Web.”

The later children’s books I’m not so familiar with. But that makes sense, since they came out when I was no longer a kid.

I have to agree with Tom. Where the Wild Things Are was a great book. I enjoyed it thoroughly as a child and the illustrations were very unique. The subject matter was supposed to be scary, but the illustrations had a wild look without actually scaring the reader. Very nice. And I have to say the choice of illustration for the Charlotte’s Web stamp was very weak. That could have been just any pig. How would you know it was supposed to be Wilbur? I liked that story as a child and was disappointed to see that image being used… Read more »