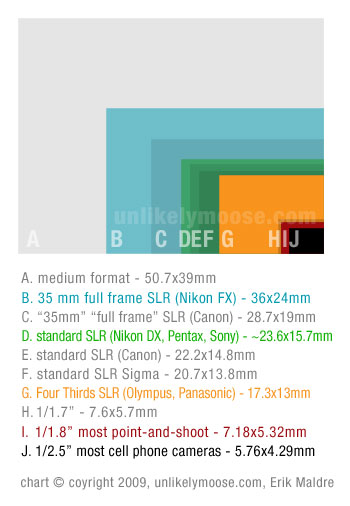 These are placed in order of importance. Yea, image sensors and lens optics are that important.

I have never seen a good illustration comparing the basic image sensors so I put one together. There’s also a 300 dpi illustration on my flickr page.

And of course the medium format sensor just destroys all the other sensors out there. Got about 20 grand? That’s what it’ll cost to buy a medium format digital camera (as of this posting).

Four Thirds SLR is an intriguing option. It’s not too much smaller than the standard SLR sensors. The advantage of the Four Thirds system is that it allows for much, much smaller SLR bodies. (There’s no bulky mirror system necessary.)

1/1.8″ (I) is what most consumer cameras have. Notice how much smaller it is compared to the SLR sensors. That’s why you get superior image quality from an SLR image sensor.

The flickr photo hasn’t been uploaded yet. Will do so tonight.

This post was obviously written by someone who knows nothing about Canon’s sensors. Canon has 3 sensor sizes one of them is 28.7mm x 19mm but their full frame sensor is 36mm x 24mm just like the Nikon. The 28.7mm x19mm is their 1.3 crop sensor.

[…] for the reasons noted above. Plus Canon’s full frame sensor really isn’t full frame as noted in one of my previous blog posts. It’s only half way to being full frame. Canon is being really sneaky about that and I wish the photography industry would expose […]