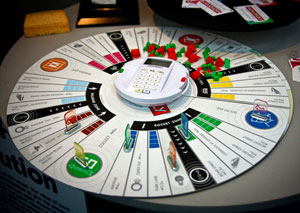 Wired.com gadget lab has a photo and brief article about the new Monopoly board design. I’m not happy with the design.

Usability is paramount to user experience in game board design. The new Monopoly game will not be fun to play and will encourage massive levels of cheating.

The credit card machine is simply terrible. A core function of Monopoly is the transaction of money. Having the money center in the middle of the board requires players to be constantly reaching awkwardly to the center. And the stupid machine is going to be turned around constantly as each person uses it.

I suppose you could assign someone as banker and they punch in the numbers to avoid having to turn the stupid thing all the time. But do you really trust one of your competitors to accurately punch in the right numbers ever single time? Even if you do, there’s still a chance they punch in the wrong number by accident. I don’t want another player yielding such control over the entire game.

But there’s an even bigger problem. It will be so incredibly easy to cheat. The keypad on the machine is the heart of this game. It will be very easy to punch in different numbers. And since transactions are central to this game, the focal point of the user experience will be watching the keypad like a hawk AT every single point of the game. Oh that sounds like so much fun. “YOU PUNCHED IN A NINE INSTEAD OF A SIX! I SAW YOU!” “NO I DIDN’T!”

How do you keep track of how much money you have? Yea, you swipe your stupid credit card and the machine tells you. But surely any Monopoly player worth their salt will be plotting their business strategy when it’s someone else’s turn. How do you know your current bankroll? You either have to memorize the number which will change almost every single time you take a turn. Or you have to write down the number. I don’t see any notepads that come with the game. Stupid.

The display on the card machine is incredibly small. Look at all the white space on the thing and look at the size of the screen. Dumb. Why is the screen positioned flat? Am I supposed to stand up every single turn to look at the screen? Dumb.

Why are the buttons on the card machine a yellowish white and the rest of the machine is a blueish white? Looks stupid. Why is the machine a different shade of white from the board game? Terrible graphic design. Given the incredibly important role of the card machine, there was next to zero attention given to how it looks or functions.

And when those pieces get knocked over, it will hard to tell where they should be standing because the stupid spaces on the board are so incredibly skinny.

Those skinny spaces will make it very easy to cheat as well. People will be trying to skip spaces to land on desirable property and they will do it very easily because of the skinny spaces.

And then there’s the pieces. The clear plastic looks nice. I’ll give them that. Though they won’t look so nice about 10 years from now when they turn nasty and yellow. By imprinting the different items on the plastic loses the context of what they are. When they were metal pieces, they were tangible three-dimensional objects thus justifying their existence. By printing line art illustrations on plastic, they lose all sense of being.

ugh. It looks like “Wheel of Fortune” gone horribly wrong!

Here’s an absolutely beautiful revamping of the packaging for the Monopoly game by Andy Mangold: http://www.andymangold.com/monopoly-repackaging/

I doubt the original had an electronic card reader and pie-wedge properties. To me, it’s clear that this had nothing to do with going “back to its roots”, but rather was a failed attempt at modernizing the game. It’s simple, everyone has Monopoly… no one needs to buy it again. Make a new one that costs more. Also, Hasbro has also created the game “Charge Large” which sounds VERY “monopoly”-ish. http://www.hasbro.com/games/en_US/shop/details.cfm?guid=A1F82F35-19B9-F369-D9FF-EA3DD61E84AA&product_id=25584&src=endeca “Enjoy Great Credit, Without the Crunch! In todays economy, getting and keeping good credit isnt easy. But now you can take the crunch out of credit with CHARGE LARGE,… Read more »

did they make a Monopoly movie?

I do sug[i][/i]gest a Monopoly movie. Heck. Maybe I’ll make my own! Imagine it. All the different streets. With houses built and hotels. And the mayhem. People going bankrupt. Getting out of jail. It’ll be crazy!