Yesterday’s blog post gave some insight into what makes Micro Four Thirds cameras so great. The only problem is that there hasn’t been any true Micro Four Thirds cameras… until yesterday. The Olympus EP-1 was announced amidst months of rumors. Among those rumors where those stating the EP-1 would be inspired by the famous Olympus Pen series from the 1950s and 1960s. Well, Olympus kinda fell flat on their face on this one (in terms of the design).

If Olympus is going to go retro with this camera, then they should have done it 100%.

The top white section tries to blend too many current design aesthetics with its beveled tier and sloping arc to the left of the Olympus logo.

The radius of all the corners are much too large. The corners should be much less round and much more angular.

The brown leather-like grip is an interesting venture and a great idea. Yet it appears that this grip is simply a rounded rectangle on the front of the camera resulting in a patch-like appearance. For stronger aesthetic appeal, the grip should wrap around the edge of the camera. The beveled frame around the grip is an awkward framing element which only emphasizes the look of it being a patch.

Essentially, the Olympus EP-1 should be more box-like in its overall appearance and within the details. Simplicity is king in retro design. Over-designed elements such as those featured in the white top diminish the retro look. Unfortunately the concept camera, shown below, has a truer retro feel and better over all design than the final model.

As a side note, the view finder shown in the EP-1 above is add-on to the mount. It looks incredibly stupid on the camera. 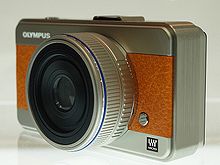 Olympus didn’t make it too boxy, because they didn’t want to make it too apparent that they are just ripping the design off from Leica.