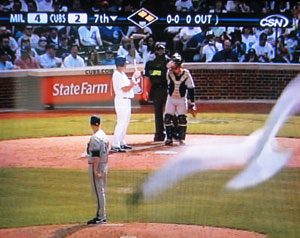 I hereby declare that the seagull is now officially the good luck creature for the Chicago Cubs. People tend to get a little obsessive over a silly goat. So why not find something that will turn the tide in the Cubs favor? Why a seagull? Read on.

Today I was watching the Cubs-Brewers game with my son. We turned on the TV in the bottom of the seventh. We were immediately greeted by a sea gull flying directly in front of the center field bleacher camera. I don’t ever recall seeing such an event on a Cubs telecast. Perhaps my memory is not serving me properly.

It was a pretty wild game. The Cubs managed to get within one run in the 7th (score 4-3), but couldn’t capitalize with the bases loaded and two outs. Xavier Nady grounded out to second. Then the Brewers seemingly blew the game open by scoring 2 more runs in the 8th off AAA call-up, Jeff Gray, who happens to be the first Cub to wear 34 since Kerry Wood. (Score 6-3).

Next thing you know, it’s two outs in the bottom of the 8th and we started wondering how they were going to get three runs off the all-time save king, Trevor Hoffman, in the 9th inning. Tyler Colvin got a simple enough single and then it got really interesting when the next two batters were walked. I didn’t mention the Brewers pitcher happened to be the worst former Cubs pitcher of all time, LaTroy Hawkins. Ha ha! Theriot makes it 6-5 with a two-run single. Fukudome was massively clutch with a two-run single to make it 7-6. All this with 2 outs. This the Chicago Cubs, right?

Marmol was incredibly dominant in the 9th making the heart of the Brewers lineup (Hart, Braun, and Fielder) look like sissies by striking out the side.

All thanks to the lucky Wrigley Field sea gull.

You think a gull (and by the way, he’s just a gull, not a seagull) or a Rickette can cure the curse of the Billy Goat? I’m not sure, but it’s a nice thought